HELPING YOU GET THERE : NEW PREMISES OF IMPACT INAUGURATED

HELPING YOU GET THERE : NEW PREMISES OF IMPACT INAUGURATED

A very warm Namaste and a resounding Jai Hind!

A few weeks ago, I had written about the journey of IMPACT and the results its wards have obtained over the years. It is time to share some more good news about this institution.  Here is a write up about the inauguration of it’s new premises:

The new premises of IMPACT Coaching Institute were inaugurated on 08 March 20 by Mr Karan A Singh, Chief Secretary, Government of Punjab, during a scintillating show put up by the students. Major General IP Singh (Retired), Director, Mai Bhago AFPI and Dr Manjit Singh, Director, TBRL also graced the occasion, along with some veterans and other guests.

The Chief Secretary was received warmly by Lieutenant Colonel Piyush Bahuguna (Retired), the Director of the Institute and other faculty members, including Colonel HS Chauhan (Retired) and Brigadier Sandeep Rawat (Retired).  The students of the institute displayed their talents in recitation of poetry, as well as in singing, acting and an exhilarating exhibition of Bhangra.

During his welcome address, the Director informed that Impact Coaching & Educational Services Private Limited was established in 2003 to translate his vision of a focused Training Institution “with a difference” to reality, with a mission to motivate and train young boys and girls for a career in the defence services.  Accordingly, IMPACT has developed a unique curriculum to guide students over a period of two years, preparing them for the NDA entrance exam, even as they studied for their classes XI and XII, while also grooming their personalities to meet the exacting standards of the Armed Forces.

Speaking after inaugurating the facility, the Chief Secretary congratulated the faculty and students on the excellent show and exhorted the faculty to continue their good work in motivating and guiding the youth towards a glorious career in the Indian Armed Forces. The Chief Secretary also inspected the new premises and appreciated the amenities, including the air-conditioned classrooms, hostel accommodation and dining hall.  He was particularly appreciative of the thought behind the ‘Heroes’ Portal‘ at the entrance and the nomenclature adopted for various corridors and rooms.  He applauded the unique model developed by Impact and wished the institute the very best for a bright future.

A photo of a write-up displayed on the portal, highlighting the thought behind the Heroes’ Portal is enclosed, along two more of the portal. Shall share later, glimpses of some action presented by our boys, which made such an Impact!

What do you think about the Heroes’ Portal? Do write and let me know. See you soon!! 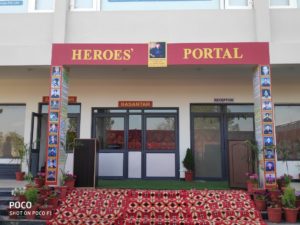 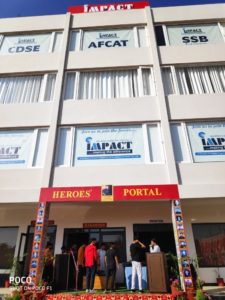 MAKING THE ARMED FORCES YOUR WAY OF LIFE :
UNDERSTANDING OFFICER LIKE QUALITIES

MAKING THE ARMED FORCES YOUR WAY OF LIFE:
THE SERVICE SELECTION BOARDS TODAY

MAKING THE ARMED FORCES YOUR WAY OF LIFE :
EVOLUTION OF THE SERVICE SELECTION PROCESS

Happy to help you:)